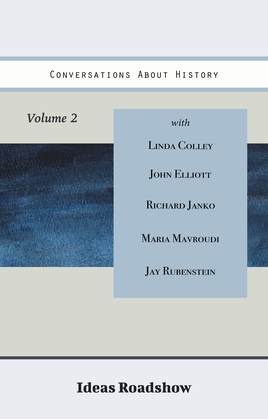 Conversations About History, Volume 2, includes the following 5 carefully-edited Ideas Roadshow Conversations featuring leading historians. This collection includes a detailed preface highlighting the connections between the different books. Each book is broken into chapters with a detailed introduction and questions for discussion at the end of each chapter:

1. Constitutional Investigations - A Conversation with Linda Colley, the Shelby M.C. Davis 1958 Professor of History at Princeton University. Linda Colley is a leading expert on British, imperial and global history since 1700. After inspiring insights about Linda Colley’s teachers and professors who had a strong impact on her future career as a historian, this wide-ranging conversation provides a detailed examination of the global history and present state of constitutions and their impact.

2. The Passionate Historian - A Conversation with John Elliott, Professor of Modern History at University of Oxford. This extensive conversation provides behind-the-scenes insights into how an undergraduate encounter with a 17th-century painting of The Count-Duke Olivares led John Elliott on a lifelong odyssey to study the history of Spain, Europe and the Americas in the early modern period to become one of the greatest Spanish historians of our age.

3. The Derveni Papyrus - A Conversation with Richard Janko, Gerald F. Else Distinguished University Professor of Classical Studies at the University of Michigan. This comprehensive conversation covers Richard Janko’s research on the Derveni Papyrus, Europe’s oldest surviving manuscript from the 4th century BCE and the most important text relating to early Greek literature, science, religion and philosophy to have come to light since the Renaissance.

4. Byzantium: Beyond the Cliché - A Conversation between Howard Burton and Maria Mavroudi, Professor of History at UC Berkeley. Maria Mavroudi specializes in the study of the Byzantine Empire and this wide-ranging conversation explores her extensive research on the Byzantine Empire and how it has repeatedly been undervalued by historians despite its having been a military and cultural powerhouse for more than a millennium.

5. Apocalypse Then: The First Crusade - A Conversation with Jay Rubenstein, Professor of History and Director of the Center for the Premodern World at the University of Southern California. This thought-provoking book provides us with fascinating expert insights into medieval society and how the First Crusade happened: What could have suddenly caused tens of thousands of knights, commoners and even nuns at the end of the 11th century to leave their normal lives behind and trek thousands of miles across hostile territory in an unprecedented vicious and bloody quest to wrest Jerusalem from its occupying powers?

Howard Burton is the founder and host of all Ideas Roadshow Conversations and was the Founding Executive Director of Perimeter Institute for Theoretical Physics. He holds a PhD in theoretical physics and an MA in philosophy.