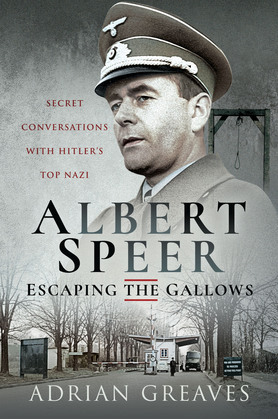 At the Nuremberg War Crimes Tribunal, Albert Speer, Hitler’s one-time number two, persuaded the judges that he ‘knew nothing’ of the Holocaust and related atrocities. Narrowly escaping execution, he was sentenced to twenty years in Spandau Prison, Berlin.

In 1961, the newly commissioned author, as the British Army Spandau Guard Commander, was befriended by Speer, who taught him German. Adrian Greaves’ record of his conversations with Speer over a three year period make for fascinating reading. While the top Nazi admitted to Greaves his secret part in war crimes, after his 1966 release he determinedly denied any wrongdoing and became an intriguing and popular figure at home and abroad. Following Speer’s death in 1981 evidence emerged of his complicity in Hitler’s and the Nazi’s atrocities.

In this uniquely revealing book the author skilfully blends his own personal experiences and relationship with Speer with a succinct history of the Nazi movement and the horrors of the 1930s and 1940s. In so doing new light is thrown on the character of one of the 20th century’s most notorious characters.