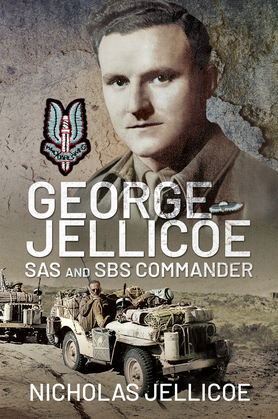 George Jellicoe, son of Admiral Sir John Jellicoe, commander of the British Grand Fleet at Jutland, was never compromised by his privileged upbringing. In this insightful biography, his son describes a life of action, drama, public service and controversy.

George’s exploits with the newly formed SAS, as David Stirling’s second-in-command, and later commanding the SBS, make for fascinating reading. Over four years it embraced the North African and Mediterranean campaigns and culminated in the saving of a newly-liberated Athens from the communist guerrillas of ELAS.

The brutality of Stalinist communism led him to join the post-war Foreign Office. In Washington he worked with Kim Philby and Donald Maclean in the cloak and dagger world of espionage. Resigning in 1958 so he could marry the woman he loved, he turned to politics. Although his ministerial career ended in 1973 after unwittingly become entangled with the Lambton scandal, he continued to sit in the House of Lords becoming ‘Father of the House’. He held numerous public appointments including President of the Royal Geographical Society, Chairman of the Medical Research Council, President of the SAS Regimental Association and the UK Crete Veterans Association.

Thanks to the author’s research and access, this is more than a biography of a significant public figure. It provides fascinating detail of Special Forces operations and the characters of the countless figures with whom he mixed.