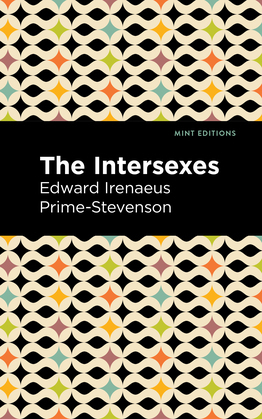 The Intersexes: A History of Similisexualism as a Problem in Social Life (1906) is a work of nonfiction by Edward Irenaeus Prime-Stevenson. Written while Prime-Stevenson was living as an expatriate in Europe, The Intersexes is a defense of homosexuality grounded in scientific and historical research. Throughout his career, Prime-Stevenson sought to dispel falsehoods surrounding the history and social acceptance of homosexuality. Writing under the pseudonym Xavier Mayne, Prime-Stevenson took great care to insulate himself from the reprisal common to the period in which he worked. Despite his limited audience—copies of his works numbered in the hundreds—Prime-Stevenson is now recognized as a pioneering advocate for the rights of the LGBTQ community. “Between a protozoan and the most perfect development of the mammalia, we trace a succession of dependent intersteps...A trilobite is at one end of Nature's workshop: a Spinoza, a Shakespeare, a Beethoven is at the other. […] Why have we set up masculinity and femininity as processes that have not perfectly logical and respectable inter-steps?” Seeking to defend homosexuality as a natural result of human evolution, Prime-Stevenson offers his theory of intersexes, of which he identifies two while leaving room for more to be defined in the future. To do so, he rejects the binary of masculine and feminine, both of which fail to describe the vast majority of humanity, in favor of a broader spectrum of sexual identity. Using the terms Uranian and Uraniad, which align with gay and lesbian respectively, Prime-Stevenson attempts to define these types, call attention to historical examples, and critique the societal condemnation and persecution of such individuals as “degenerate” or “criminal.” This groundbreaking study, perhaps the first to approach homosexuality from a scientific, historical, personal, and legal point of view, is recognized today as a landmark in queer literature by academics around the world. With a beautifully designed cover and professionally typeset manuscript, this edition of Edward Irenaeus Prime-Stevenson’s The Intersexes: A History of Similisexualism as a Problem in Social Life is a classic work of queer literature reimagined for modern readers.