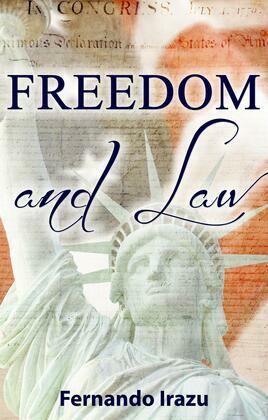 "Freedom and Law" addresses a variety of issues posed by the rule of law, in the context of Christianity and our Western civilization, as lived within the republican system of government with democratic participation in America.  In particular, this work embarks on conceptual issues dealing with human nature, morality, justice, law, rights, especially the right to privacy, equality and discrimination, as well as "identity politics" and related topics from the perspective of the system of government established in the US constitution by the Founding Fathers.

At this juncture, it also elaborates on the political dynamics embroiling the Supreme Court of Justice vis a vis the other two branches of government as to the prior, and, while cherishing the foundations of America, it puts forward a vision that coherently protects human freedom in the widest array of human activities.

"Freedom and Law" is a call for human freedom at the personal, communitarian and countrywide levels, always geared at the better horizons offered by human nature.

Fernando Irazu is an attorney licensed to practice law in the State of New York and before the US Supreme Court of Justice. He pursued his studies at Harvard Law School and the Argentinean Catholic University. Some of his interests include comparative constitutional law and political institutions, philosophy and anthropology, as well as theology. He has practiced law with both English and US law firms in New York City, and worked as an investment banker with different top-tier financial institutions. For almost thirty years he has lived in Connecticut and New York City, where his three beloved children were born and raised.