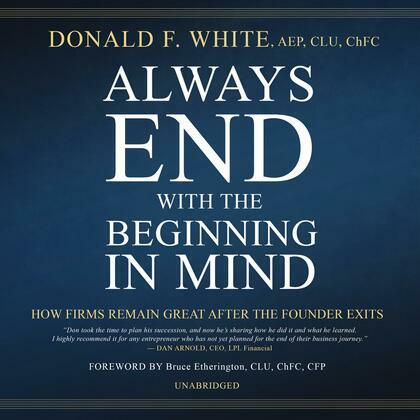 Always End with the Beginning in Mind

The world likes to believe life is a series of endings. Some are good, others bad, but things always end. In the modern age, the movie ends, the television show ends, the book finishes with "The End", and we start to believe life is about endings. This book is based on the premise that endings are just new beginnings. Everyone can end, with the beginning in mind. Giving up the concept of "everything ends" is one of the most important steps in business continuity.

People love to talk about Succession Planning, but few ever accomplish the task. The numbers are staggering. The US Department of Labor Statistics tell us after one year in business, 20% of new businesses in America fail, but after 20 years only about 20% of those same businesses will have survived. Of those who survive, less than 20% will continue to a second generation! Most businesses have a cessation plan (a plan that leads to a business ceasing to exist), while very few have succession plans (a plan that leads to a business not only continuing, but thriving after the founder exits).

In Always End with the Beginning in Mind, Donald takes you on a journey that resulted in a successful business continuation, and will give a founder of a business the steps necessary for a succession plan to actually succeed. A well-thought out and properly executed Succession Plan is a classic win-win. It is a win for the company, namely the clients and staff who are able to enjoy continuity after the founder's exit. It is a win for the successor, who is able to build on the success of the founder. Finally, it is a win for the founder, who is able to exit on their own volition and see what they have built continue to prosper for years to come.

Firms can succeed into perpetuity. They do not need to eventually cease. A businessperson who exits a business without seeing their exit as an ending, but as a new beginning, both for themselves and the business, can enjoy seeing the firm they spent a lifetime building continue to prosper after the business transitions to new leadership and simultaneously enjoy a new season of life personally. Do not leave business continuity to fate! Read this book and discover the tools necessary to move from a reactive cessation plan to a proactive plan of succession.