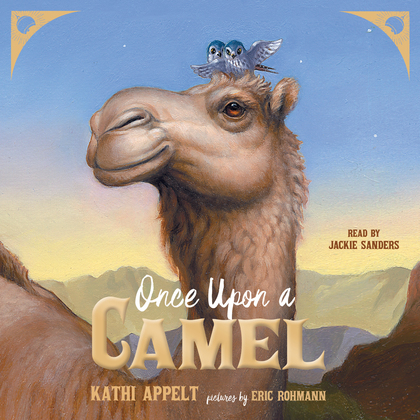 Once Upon a Camel

Perfect for fans of The One and Only Ivan, this exquisite middle grade novel from Newbery Honoree and National Book Award finalist Kathi Appelt follows an old camel out to save two baby kestrel chicks during a massive storm in the Texas desert— filled with over a dozen illustrations by Caldecott winner Eric Rohmann.

Zada is a camel with a treasure trove of stories to tell. She’s won camel races for the royal Pasha of Smyrna, crossed treacherous oceans to new land, led army missions with her best camel friend by her side, and outsmarted a far too pompous mountain lion.

But those stories were from before. Now, Zada wanders the desert as the last camel in Texas. But she’s not alone. Two tiny kestrel chicks are nestled in the fluff of fur between her ears—kee-killy-keeing for their missing parents—and a dust storm the size of a mountain is taking Zada on one more grand adventure. And it could lead to this achy old camel’s most brilliant story yet.