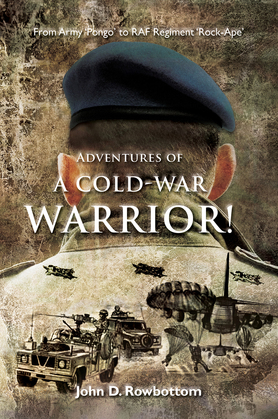 Adventures of a Cold-War Warrior!

This is a humorous – and at times, tongue-in-cheek – account of the author’s time in Her Majesty’s Armed Forces, from soldier to ‘rock ape’ (RAF Regiment), with a stint as a ‘penguin’ (steward) tucked in between.
Covering the period from 1966 to 1976, when the Cold War was still in full swing, the book tells what went on behind the scenes that the recruiting posters and adverts would never show you. Prepare to laugh, smile, shake your head in disbelief at the strange and at times downright crazy goings-on, as the author and his pals jump from one crazy adventure to the next.
This is not a book for the faint-hearted or easily offended. These are real characters that the author met, though some of the names may have been changed, as they say in all the best films, ‘to protect the guilty’! When reading, the reader is experiencing for themselves what is happening along with the author.
To those who have never been in the forces and don’t know the mindset of the military mind and reasoning of one who serves his country, the characters in this book may come across as having a beer-drinking, girl-chasing, cavalier attitude. Not true – but when single and in our late teens/early twenties and a product of the times, we lived life to the full, not knowing if the Cold War would one day turn hot…