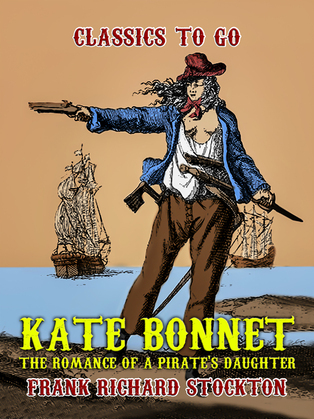 Kate Bonnet, The Romance of a Pirate's Daughter

Excerpt: "The month was September and the place was in the neighbourhood of Bridgetown, in the island of Barbadoes. The seventeenth century was not seventeen years old, but the girl who walked slowly down to the river bank was three years its senior. She carried a fishing-rod and line, and her name was Kate Bonnet. She was a bright-faced, quick-moving young person, and apparently did not expect to catch many fish, for she had no basket in which to carry away her finny prizes. Nor, apparently, did she have any bait, except that which was upon her hook and which had been affixed there by one of the servants at her home, not far away. In fact, Mistress Kate was too nicely dressed and her gloves were too clean to have much to do with fish or bait, but she seated herself on a little rock in a shady spot not far from the water and threw forth her line. Then she gazed about her; a little up the river and a good deal down the river."