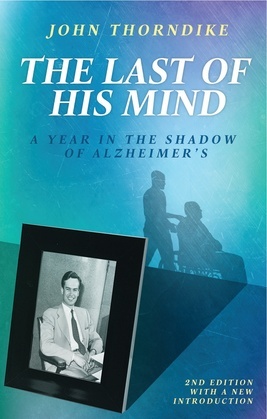 The Last of His Mind

The second, expanded edition of this acclaimed memoir by an Alzheimer’s caregiver living with his father during his final year includes a new introduction that illustrates the immense toll of the disease, important lessons from the author’s experience, and a readers' guide.

Joe Thorndike was managing editor of Life at the height of its popularity immediately following World War II. He was the founder of American Heritage and Horizon magazines, the author of three books, and the editor of a dozen more. But at age ninety-two, in the space of six months he stopped reading or writing or carrying on detailed conversations. He could no longer tell time or make a phone call. He was convinced that the governor of Massachusetts had come to visit and was in the refrigerator.

Over six million Americans suffer from Alzheimer’s, and like many of them, Joe Thorndike’s one great desire was to remain in his own house. To honor his wish, his son John left his own home and moved into his father’s upstairs bedroom on Cape Cod. For a year, in a house filled with file cabinets, photos, and letters, John explored his father’s mind, his parents’ divorce, and his mother’s secrets. The Last of His Mind is the bittersweet account of a son’s final year with his father and a candid portrait of an implacable disease.

It’s the ordeal of Alzheimer’s that draws father and son close, closer than they have been since John was a boy. At the end, when Joe’s heart stops beating, John’s hand is on his chest, and a story of painful decline has become a portrait of deep family ties, caregiving, and love.