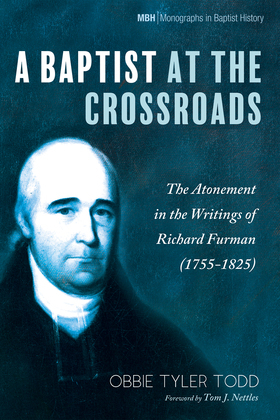 A Baptist at the Crossroads

South Carolina Baptist Richard Furman (1755-1825) personified a host of seeming contradictions. As a Regular Baptist baptized by a Separate Baptist, an ardent patriot with puritan sensibilities, a Federalist who zealously defended religious liberty, and a slave-owning aristocrat who associated with backwoods revivalists, Furman is a complex figure in American history. His doctrine of atonement exhibited this same complexity, as he uniquely held to both a penal substitutionary theory of the atonement as well as to a moral governmental view, models of the atonement that were often conceived as mutually exclusive in the nineteenth century. Furman was the first of his American Baptist kind to attempt to integrate these two models. As a Baptist standing at the political, cultural, and theological crossroads of America, Furman blended Edwardsean and confessional Calvinism, Regular and Separate Baptist traditions, and a host of other elements into his theology, laying the groundwork for an entire generation of Southern Baptists who followed in his theological footsteps.