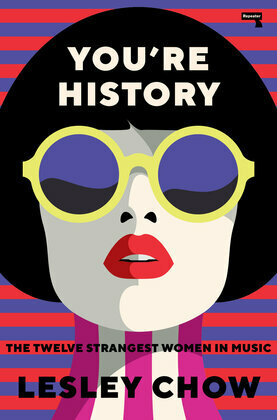 From Kate Bush to Nicki Minaj, from Janet Jackson to TLC and Taylor Swift, pop's greatest female pioneers are simply strange: smashing notions of taste and decorum, and replacing them with new ideals of pleasure.

Instead of rehashing biographies, Lesley Chow dives deep into the music of these groundbreaking performers, identifying the ecstatic moments in their songs and finding out what makes them unique.

You're History is a love letter to pop's most singular achievements, celebrating the innovations of women who are still critically underrated. It's a ride that includes tributes to Chaka Khan, Rihanna, Neneh Cherry, Sade, Shakespears Sister, Azealia Banks, and many more...

“The slim, sharp book considers a range of female artists from Janet Jackson and Taylor Swift to TLC and Nicki Minaj, a group that the Australian cultural critic Chow views as ‘outliers, marking moments where the culture might have swerved to incorporate their influence, but somehow contrived not to.’” — New York Times summer reads