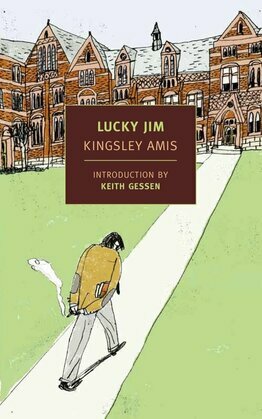 A hilarious satire about college life and high class manners, this is a classic of postwar English literature.

Regarded by many as the finest, and funniest, comic novel of the twentieth century, Lucky Jim remains as trenchant, withering, and eloquently misanthropic as when it first scandalized readers in 1954. This is the story of Jim Dixon, a hapless lecturer in medieval history at a provincial university who knows better than most that “there was no end to the ways in which nice things are nicer than nasty ones.” Amis’s scabrous debut leads the reader through a gallery of emphatically English bores, cranks, frauds, and neurotics, with each of whom Dixon must contend in one way or another in order to hold on to his cushy academic perch and win the girl of his fancy.

More than just a merciless satire of cloistered college life and stuffy post-war manners, Lucky Jim is an attack on the forces of boredom, whatever form they may take, and a work of art that at once distills and extends an entire tradition of English comic writing, from Fielding and Dickens through Wodehouse and Waugh. As Christopher Hitchens has written, “if you can picture Bertie or Jeeves being capable of actual malice, and simultaneously imagine Evelyn Waugh forgetting about original sin, you have the combination of innocence and experience that makes this short romp so imperishable.”