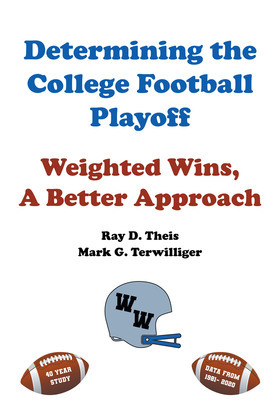 In this book, we explore the history of college football, and in particular the mythical college championship, from 1869 to the present day. For several years, different media outlets took it upon themselves to declare a national championship, which led to nothing short of confusion. In one year, four different teams were named champion!

This chaotic situation and accompanying controversy ultimately led to the creation of the Bowl Championship Series, or BCS. Initially, the BCS selection was based on a formula that incorporated several polls and computer models. However, the proprietary nature of the computer models and the complexity of the mathematics used to combine the data sources to arrive at the final selection did very little to quiet the controversy. This led to the creation of a selection committee to choose the four "best" teams to compete in a four-team playoff. Again, controversy has ensued, with many questioning the politics and nebulous, capricious nature of the criteria.

We have created an alternate model, which we have dubbed the weighted wins system, that defines a simple, unbiased, and consistent mechanism for evaluating and comparing the records of the teams in the NCAA's Bowl Subdivision. We have compared the results of the weighted wins model against forty years of actual game results and found that it generates very similar outcomes. The primary difference is that it completely removes politics from the selection process and offers a clear path to the playoffs for all members of the Bowl Subdivision.