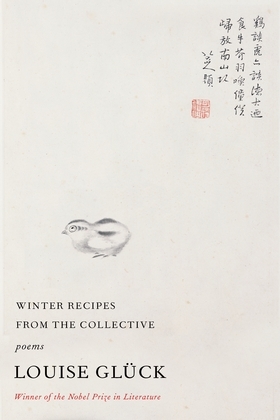 Winter Recipes from the Collective

by Louise Glück (Author)
Excerpt
Fiction Poetry
warning_amber
One or more licenses for this book have been acquired by your organisation details
EPUB
Unlimited loans, 2 years, One at a time
Details

WINNER OF THE NOBEL PRIZE IN LITERATURE

Louise Glück’s thirteenth book is among her most haunting. Here as in the Wild Iris there is a chorus, but the speakers are entirely human, simultaneously spectral and ancient. Winter Recipes from the Collective is chamber music, an invitation into that privileged realm small enough for the individual instrument to make itself heard, dolente, its line sustained, carried, and then taken up by the next instrument, spirited, animoso, while at the same time being large enough to contain a whole lifetime, the inconceivable gifts and losses of old age, the little princesses rattling in the back of a car, an abandoned passport, the ingredients of an invigorating winter sandwich, a sister’s death, the joyful presence of the sun, its brightness measured by the darkness it casts.