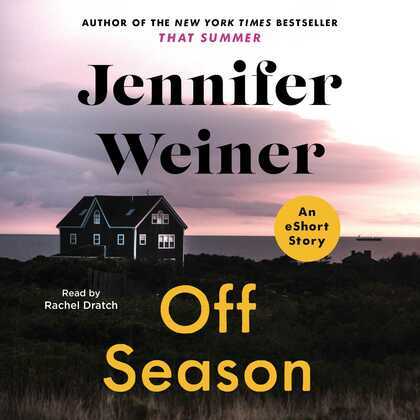 by Jennifer Weiner (Author), Rachel Dratch (Narrateur)
Excerpt
Fiction Mystery & detective Short stories Contemporary women
warning_amber
One or more licenses for this book have been acquired by your organisation details
AUDIOBOOK
Unlimited loans, 2 years, One at a time
Details

#1 New York Times bestselling author of Big Summer and Mrs. Everything channels Shirley Jackson and Stephen King to bring us a chilling tale of an author willing to do anything to revitalize her career.

Sarah Vernon has spent twenty years trying to make it as a novelist…and she’s never even come close. None of her novels has sold more than five thousand copies, and she’s never earned enough money to make fiction her full-time job. After her last disappointing publication, Sarah’s agent dumped her, and it seems like her dream is dead. Sarah vows that she’ll do anything for one last shot at the bestseller list.

Enter Will Presser. Nicknamed The Viper, Will is a literary agent whose career-making reputation precedes him. A business dinner ends with a nightcap at Will’s apartment—and a night Sarah can’t remember. When she wakes up the next morning, Will says he’s got a plan to make her new book a hit. He sends Sarah off to Elder Island, a summer playground for the rich and famous that empties out between September and May, for her own personal writer’s retreat. He’s left word that Sarah needs complete privacy in order to write, and Sarah’s too bewildered and flattered by Will’s attention to do anything but pack her bags and board the ferry.

Alone in an isolated mansion, Sarah’s writing has never come more easily. She spends hours each day lost in a trance, falling into the world of her story. She tries not to worry about the nightmares that plague her…or the mornings she wakes up with dirt on her feet and blood under her fingernails. ​

But Elder Island isn’t the pretty summer playground it seems to be, and Sarah’s going to learn that success comes at a cost, and that, whenever you sign a deal, it’s always wise to read the fine print.