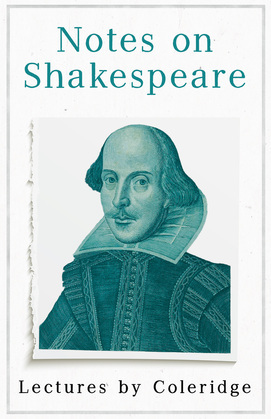 Notes on Shakespeare - Lectures by Coleridge

by Samuel Taylor Coleridge (Author)
Excerpt
Nonfiction Literary collections Essays Literary essays Fiction Poetry
warning_amber
One or more licenses for this book have been acquired by your organisation details
EPUB
Unlimited loans, One at a time
Details

Samuel Taylor Coleridge (1772–1834) was an English poet, theologian, literary critic, philosopher, and co-founder of the English Romantic Movement. He was also a member of the famous Lake Poets, together with William Wordsworth and Robert Southey. Coleridge had a significant influence on the the work of Ralph Waldo Emerson and American Transcendentalism in general, and played an important role in bringing German idealist philosophy to the English-speaking world. He was also an influential critic, garnering particular esteem for his critical work regarding William Shakespeare, which helped usher in a revival of interest in Shakespeare's plays and poetry. This volume contains a collection of Coleridge's lectures on Shakespeare, which he delivered up and down the country. Highly recommended for students and others with an interest in Shakespeare or Coleridge's work. Contents include: “Greek Drama”, “Progress of the Drama”, “The Drama Generally, and Public Taste”, “Shakespeare, a Poet Generally”, “Shakespeare's Judgment Equal to his Genius”, “Recapitulation, and Summary of the Characteristics of Shakespeare's Dramas”, “Outline of an Introductory Lecture upon Shakespeare”, “Order of Shakespeare's Plays”, “Notes on the 'Tempest'”, “'Love's Labour's Lost'”, “'Midsummer Night's Dream'”, “'Comedy of Errors'”, “'As You Like It'”, “'Twelfth Night'”, “'All's Well that Ends Well'”, etc.