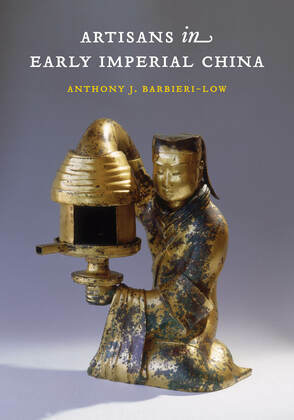 by Anthony J. Barbieri-Low (Author)
Excerpt
Nonfiction Arts History History by country Asia China
warning_amber
One or more licenses for this book have been acquired by your organisation details
EPUB
Unlimited loans, One at a time
Details

Early China is best known for the dazzling material artifacts it has left behind. These terracotta figures, gilt-bronze lamps, and other material remnants of the Chinese past unearthed by archaeological excavations are often viewed without regard to the social context of their creation, yet they were made by individuals who contributed greatly to the foundations of early Chinese culture. With Artisans in Early Imperial China, Anthony Barbieri-Low combines historical, epigraphic, and archaeological analysis to refocus our gaze from the glittering objects and monuments of China onto the men and women who made them.

Taking readers inside the private workshops, crowded marketplaces, and great palaces, temples, and tombs of early China, Barbieri-Low explores the lives and working conditions of artisans, meticulously documenting their role in early Chinese society and the economy. First published in 2007, winner of top prizes from the Association for Asian Studies, American Historical Association, College Art Association, and the International Convention of Asia Scholars, and now back in print, Artisans in Early Imperial China will appeal to anyone interested in Chinese history, as well as to scholars of comparative social history, labor history, and Asian art history.