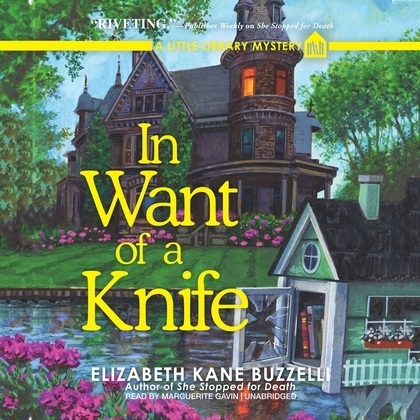 In Want of a Knife

When they investigate a string of disappearances of young girls, will Jenny Weston and Zoe Zola be dispatched with extreme pride and prejudice?

Amateur sleuth and little librarian Jenny Wilson is set on edge when the police discover a young girl’s body, dressed in an old-fashioned white lace dress, just outside Bear Falls. And when another local girl from town disappears soon after, Jenny and her next-door neighbor, author and little person Zoe Zola, know they have to help the beleaguered police chief.

But first, Jenny and Zoe have new neighbors to meet: a trio of wealthy newcomers from Chicago has just moved into a huge mansion on Lake Michigan. Nathan and Delia Wickley are genial siblings, and Fitzwilliam Dillon, the mansion’s owner, is a little person like Zoe. It is a truth universally acknowledged that a rich gentleman seeking to ingratiate himself to his new neighbors will spread a bit of largesse around, and Fitzwilliam is no exception: he has offered two million dollars to Bear Falls. But the townspeople are far from agreed on what to do with the money―and the deliberations are far from peaceful.

But it’ll all come to naught if the missing girl isn’t found and the culprit identified. And when she ventures alone to a mysterious structure in the woods, Zoe may not live to resolve her romantic dilemmas. Though neither Jenny nor Zoe is particularly placid or even-tempered, love and danger beckon them.