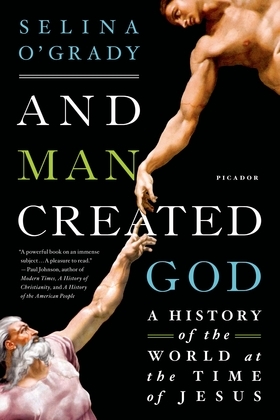 At the time of Jesus' birth , the world was full of gods. Thousands of them jostled, competed and merged with one another. In Syria ecstatic devotees castrated themselves in the streets to become priests of Atargatis In Galilee, holy men turned oil into wine, healed the sick, drove out devils, and claimed to be the Messiah. Every day thousands of people were leaving their family and tribes behind them and flocking into brand new multi-ethnic cities. The ancient world was in ferment as it underwent the first phase of globalisation, and in this ferment rulers and ruled turned to religion as a source of order and stability. Augustus, the first emperor of Rome (though he never dared officially to call himself so) was maneuvering his way to becoming worshipped as a god ? it was one of the most brilliant makeovers ever undertaken by a ruler and his spin doctors. In North Africa, Amanirenas the warrior queen exploited her god-like status to inspire her armies to face and defeat Rome. In China the usurper Wang Mang won and lost his throne because of his obsession with Confucianism.
To explore the power that religious belief has had over societies through the ages, Selina O'Grady takes the reader on a dazzling journey across the empires of the ancient world and introduces us to rulers, merchants, messiahs, priests and holy men. Throughout, she seeks to answer why, amongst the countless religious options available, the empires at the time of Jesus ?chose' the religions they did? Why did China's rulers hitch their fate to Confucianism, a philosophy more than a religion? And why was a tiny Jewish cult led by Jesus eventually adopted by Rome's emperors rather than the cult of Isis which was far more popular and widespread? The Jesus cult , followed by no more than 100 people at the time of his death, should, by rights, have disappeared in a few generations. Instead it became the official religion of the Roman Empire. Why did Christianity grow so quickly to become the predominant world religion? What was it about its teachings that so appealed to people? And Man Created God looks at why and how religions have had such an immense impact on human history and in doing so uncovers the ineradicable connection between politics and religion - a connection which still defines us in our own age. This is an important, thrilling and necessary new work of history.