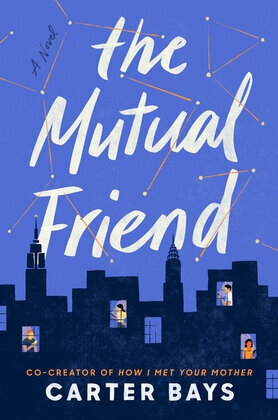 A Novel
by Carter Bays (Author)
Excerpt
Fiction Contemporary women
warning_amber
One or more licenses for this book have been acquired by your organisation details
EPUB
Unlimited loans, 2 years, One at a time
Details

"This is a rare thing: an original, intelligent novel that’s not just a perfect summer beach read, but one that deserves serious awards consideration as well. Put down your phone and pick it up… A major accomplishment.”
—Kirkus (starred)

From the co-creator of How I Met Your Mother, a hilarious and thought-provoking debut novel set in New York City, following a sprawling cast of characters as they navigate life, love, loss, ambition, and spirituality—without ever looking up from their phones.

It’s the summer of 2015, and Alice Quick needs to get to work. She’s twenty-eight years old, grieving her mother, barely scraping by as a nanny, and freshly kicked out of her apartment. If she can just get her act together and sign up for the MCAT, she can start chasing her dream of becoming a doctor . . . but in the Age of Distraction, the distractions are so distracting. There’s her tech millionaire brother’s religious awakening. His picture-perfect wife’s emotional breakdown. Her chaotic new roommate’s thirst for adventure. And, of course, there’s the biggest distraction of all: Love.

From within the story of one summer in one woman’s life, an epic tale is unearthed, spanning continents and featuring a tapestry of characters tied to one another by threads both seen and unseen. Filled with all the warmth, humor, and heart that gained How I Met Your Mother its cult following, The Mutual Friend captures in sparkling detail the chaos of contemporary life, a life lived simultaneously in two different worlds—the physical one and the one behind our screens—and reveals how connected we all truly are.