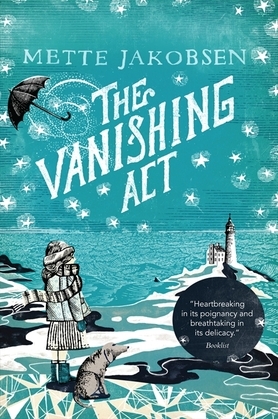 by Mette Jakobsen (Author)
Excerpt
Fiction Fantasy Nordic literature
warning_amber
One or more licenses for this book have been acquired by your organisation details
EPUB
26 loans, One at a time
Details

On a small snow-covered island—so tiny that it can’t be found on any map—live twelve-year-old Minou, her philosopher Papa (a descendent of Descartes), Boxman the magician, and a clever dog called No-Name. A year earlier, Minou’s mother had left the house wearing her best shoes and carrying a large black umbrella. She never returned.

One morning, Minou finds a dead boy washed up on the beach. Her father decides to lay him in the room that once belonged to her mother. Can her mother’s disappearance be explained by the boy? Will Boxman be able to help find her? Minou, unwilling to accept mother’s death, attempts to find the truth through Descartes’ philosophy. Over the course of her investigation, Minou will discover the truth about loss and love, a truth that The Vanishing Act conveys in a voice that is uniquely enchanting.