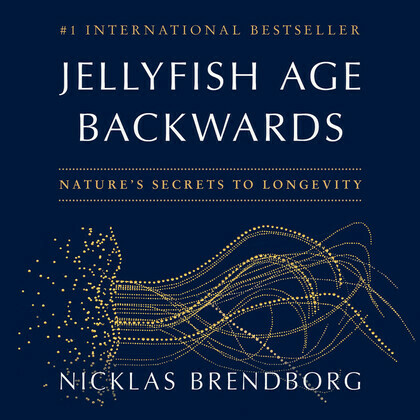 Nature's Secrets to Longevity
by Nicklas Brendborg (Author), Joe Leat (Narrateur)
Nonfiction Science and technics Science Life sciences Biology Developmental biology
warning_amber
One or more licenses for this book have been acquired by your organisation details
AUDIOBOOK
Unlimited loans, 2 years, One at a time
Details

This eye-opening book offers a revelatory scientific deep dive into how plants and animals have already unlocked the secrets to immortality–and the lessons they hold for us all.

Recent advances in medicine and technology have expanded our understanding of aging across the animal kingdom, and our own timeless quest for the fountain of youth. Yet, despite modern humans living longer today than ever before, the public’s understanding of what is possible is limited to our species—until now. In this spunky, effervescent debut, the key to immortality is revealed to be a superpower within reach. With mind-bending stories from the natural world and our own, Jellyfish Age Backwards reveals lifespans we cannot imagine and physiological gifts that feel closer to magic than reality:

Mixing cutting-edge research and stories from habitats all around the world, molecular biologist Nicklas Brendborg explores extended life cycles in all its varieties. Along the way, we meet a man who fasted for over a year; a woman who edited her own DNA; redwoods that survive thousands of years; and in the soil of Easter Island, the key to eternal youth. Jellyfish Age Backwards is a love letter to the immense power of nature, and what the immortal lives of many of earth's animals and plants can teach us about the secrets to longevity.

A Sunday Times (UK) Best of the Year Pick"Nicklas Brendborg accessibly guides the non-scientist through the science of aging ... all written with a fun, appealing voice, making for a surprisingly upbeat read." —Dr. Robert Sapolsky