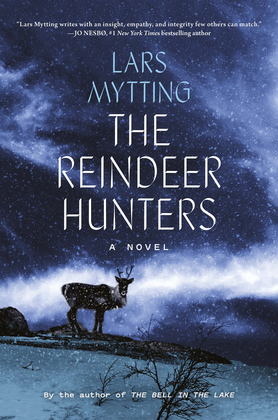 The second novel in the internationally bestselling Sister Bells trilogy, an epic, moving, and gloriously told historical novel following The Bell in the Lake, an Indie Next pick

The second novel in Lars Mytting’s powerful and compelling Sister Bells trilogy, The Reindeer Hunters is both a sequel to The Bell in the Lake and a stand-alone novel. Set again in fictional Butangen, Norway, where the story of the conjoined twin sisters Halfrid and Gunhild Hekne provides the mythical and mystical undergirding, The Reindeer Hunters unfolds around the extraordinary tapestry that portrays the sisters’ vision of Doomsday. After their death in 1613, the tapestry was given to the village church and lost at some point over the centuries.

The year is 1903. Twenty-two years after the events of The Bell in The Lake, Astrid Hekne’s son, Jehans, is now a young man. Driven out by his family, he lives on a homestead in the mountains near the village of Butangen, where he relishes the freedom of his life apart, fishing and hunting for his livelihood. One August morning, Jehans kills a massive reindeer and at the same moment encounters an enigmatic hunter . . .

At the new church in Butangen, Pastor Kai Schweigaard is living with the consequences of his past betrayal––arranging the dismantling and sale of the stave church––including deaths and the loss of the church’s mystical sister bells. Kai becomes obsessed with finding the ancient tapestry woven by the conjoined sisters in whose memory the bells were cast, with the hope that the tapestry will bring him redemption.

Despite the unraveling legends from the past that continue to haunt these people, they must figure out how to look to the future. A magnificent story about love, sorrow, and courage, as well as taming waterfalls and the first flash of electric light in the village night, The Reindeer Hunters is a grand and thrilling novel about what it takes to live in and embrace a new era.