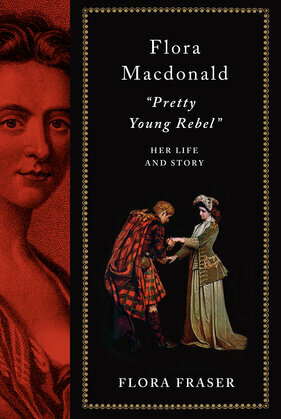 A captivating biography of the remarkable young Scotswoman whose bold decision to help “Bonnie” Prince Charlie—the Stuart claimant to the British throne—evade capture and flee the country has become the stuff of legend.

After his decisive defeat at the Battle of Culloden in 1746, Prince Charles Edward Stuart was a man on the run. Seeking refuge in the Outer Hebrides, hoping to escape to France, he found an unlikely ally in Flora MacDonald, a young woman in her early twenties, loyal to the Stuarts. Disguising the prince as an Irish maid, petticoats and all, Flora conveyed Charles by boat to Skye, where they lodged safely with her family, until the prince’s inexpert handling of feminine attire caused concern, and he was persuaded to forgo the ruse before fleeing the area undetected. Flora never saw him again.

This famous incident led to Flora’s enduring appeal as a courageous Scottish heroine, inspiring and influencing countless novels, poems, and songs—most notably, the classic ballad “Skye Boat Song” adapted from a traditional tune in the late nineteenth century. But her remarkable life didn’t come to a close with her clandestine mission to Skye. Faced with a confession from one of the boatmen, Flora was arrested and taken to London on charges of treason, where under interrogation, she wittily deflected questions and staunchly defended her motives. She was eventually released under the 1747 Act of Indemnity, but disaster would befall her yet again: in 1774, Flora and her husband, Allan MacDonald, fled the impoverished highlands for a brighter future in Cross Creek, North Carolina—utterly unaware of the burgeoning revolution that would upend their lives there, with Allan imprisoned and Flora fleeing, penniless, back home to the Hebrides.

In this probing, evocative portrait of a tumultuous life, master historian Flora Fraser peels away the layers of misinformation, legend, and myth to reveal Flora MacDonald in full. Fraser presents a fascinating picture of this headstrong and irrepressible woman. As Samuel Johnson declared upon visiting her in Scotland, her name was “a name that will be mentioned in history, and if courage and fidelity be virtues, mentioned with honor.”