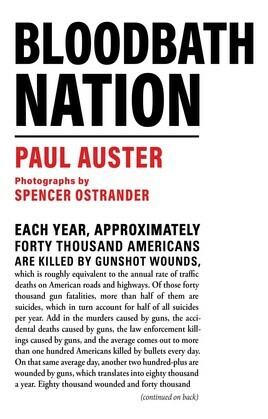 by Paul Auster (Author)
Read sample online Download sample
Nonfiction Social science Political science History & theory Criminology
warning_amber
One or more licenses for this book have been acquired by your organisation details
EPUB
Unlimited loans, One at a time
Details

Paul Auster was a crack marksman as a kid, and like most American boys of his generation he grew up playing with toy six-shooters and mimicking the gun-slinging cowboys in B-Westerns. But he also knows how families can be wrecked by a single act of gun violence: His grandmother shot and killed his grandfather when his father was just six years old.

Now, at this time of intense national discord, no issue divides Americans more deeply than the debate about guns. There are currently more guns than people in the United States, and every day more than one hundred Americans are killed by guns and another two hundred are wounded. These numbers are so large, so catastrophic, so disproportionate to what goes on elsewhere, that one must ask why. Why is America so different—and why are we the most violent country in the Western world?

In this short, searing book, Auster traces centuries of America’s use and abuse of guns, through the colonial prehistory of the Republic, armed conflict against the native population, the forced enslavement of millions, and the mass shootings that dominate the current news cycle. He examines the embattled gun-control and anti-gun-control camps, frames gun violence as a public health issue, and investigates the details of one horrific incident– including the perpetrator’s unchecked purchase of the gun he used and the suffering of a bystander-turned-hero.

Filled with haunting photographs by Spencer Ostrander that document the abandoned sites of more than thirty mass shootings, Bloodbath Nation is an unflinching work about guns in America that asks: What kind of society do we want to live in?