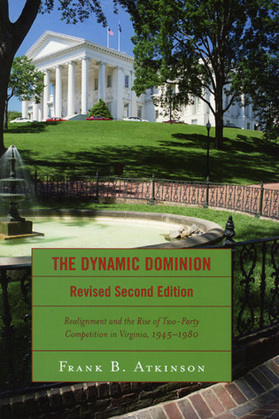 The Dynamic Dominion tells the dramatic story of Virginia's political transformation from the Second World War to the Reagan Revolution. The cradle of American democracy — and thus of the democratic movement that is sweeping the globe today — the venerable Old Dominion has emerged again in the second half of the 20th century as a dynamic political pace setter for the nation. In 1945, Virginia was a one-party, one-faction state under the aristocratic rule of conservative Democratic Senator Harry F. Byrd and his famed 'Byrd organization.' From his perch as the uncontested leader of the state that led the south, Virginia's Byrd became a regional symbol, a congressional kingpin, and a national power. With its political system and culture static, Virginia's voice was heard nationally mostly in dissent, as it had been for a century. Within a few decades, emerging two-party competition and an unprecedented party realignment combined to place the rapidly changing commonwealth in the national vanguard. Well before Republican parties throughout the South became competitive, Virginia's Republicans in the 1970s compiled the most impressive winning streak of any state party in the country. They did it by constructing a coalition of rural conservative Democrats and suburban Republicans — the same coalition that Ronald Reagan assembled nationwide in 1980, ushering in the Reagan Revolution. As told in The Dynamic Dominion, the Virginia story contains all the excitement, drama, conflict, and intrigue of a fast-paced thriller. It is a story of triumph and tragedy, celebrities and statesmen, heroes and scoundrels — of shifting party loyalties and makeshift coalitions, hard-fought campaigns and razor-close elections — of ambition and cynicism alongside sacrifice and idealism. Best of all, the tale is true. It is the fascinating story of contemporary democracy flourishing in Virginia . . . the place where it was born.