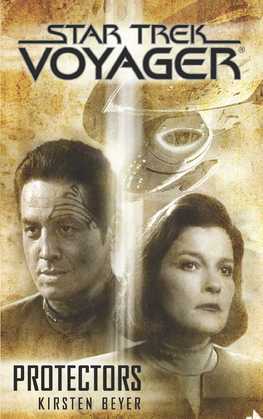 by Kirsten Beyer (Author)
Excerpt
Fiction Science fiction Adventure Media tie-in
warning_amber
One or more licenses for this book have been acquired by your organisation details
EPUB
Unlimited loans, 2 years, One at a time
Details

An all-new novel that continues the epic saga of the Starship Voyager!

Following the destruction of four fleet vessels at the hands of the Omega Continuum, the U.S.S. Voyager and U.S.S. Demeter set course for a region of the Delta Quadrant far beyond any­thing previously explored. Captain Chakotay is determined to prove to Starfleet Command that the fleet’s ongoing mission is vital to Federation interests . . . and the key to doing so may lie in a distress call Voyager received nine years earlier but could not investigate.

Meanwhile, Vice Admiral Kathryn Janeway is recalled to the Alpha Quadrant for an evaluation period to determine her next assignment. Given the trauma she has recently endured, Admiral Akaar, Starfleet’s commander in chief, is questioning Janeway’s fitness to command the fleet. Janeway’s primary concern remains the fleet’s safety— for their mission to continue, she must find a way to secure the resources they require. But the uncertainty of her superior officers has left her powerless to act in their best interests.