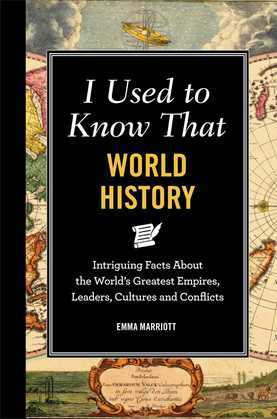 I Used to Know That: World History

by Emma Marriott (Author)
Excerpt
Nonfiction Reference Trivia
warning_amber
One or more licenses for this book have been acquired by your organisation details
EPUB
Unlimited loans, 2 years, One at a time
Details

It can be difficult to keep different historical events and figures straight in your head, which is why I Used to Know That: World History presents major episodes in history with short, easily understood sections. Among the people, movements, and events covered are:

·        The Revolutionary War-How America became independent; George Washington, the “father of the nation”

·        The Age of Empire-European colonialism in Africa and Asia; American expansion and the Civil War

·        Wars of the 20th Century-World War I and World War II; Hitler, Stalin, Churchill, and Roosevelt; the Cold War; the rise and fall of fascism and communism

Packed with important facts and sweeping overviews of historical events, I Used to Know That: World History is essential reading for anyone who wants to understand the history of civilization and the geopolitical situation of today.