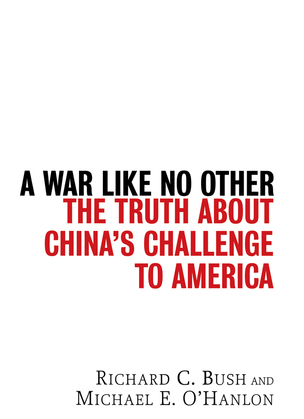 "Nobody approaches the objectivity and precision of Bush and O'Hanlon when it comes to analysis of the military and political dimensions of the Taiwan issue. This is one challenge that U.S. policymakers and military strategists cannot afford to get wrong, and scholars cannot afford to ignore."
- Michael Green, former Senior Director for Asian Affairs National Security Council

The Showdown to Come

In 1995, during a heated discussion about that year's Taiwan crisis, a Chinese general remarked to a U.S. diplomat, "In the end, you care more about Los Angeles than you do about Taipei." In a single sentence, he both questioned the level of America's commitment to a longtime ally and threatened massive, perhaps nuclear, retaliation should the United States intervene militarily on Taiwan's behalf. In the end, President Clinton sent two aircraft carriers to the region, and China ceased its military exercises in the Taiwan Strait. A decade later, however, China is much stronger, both economically and militarily, and it holds a significant amount of America's national debt. If another Taiwan crisis should occur--as it almost certainly will--would China back down?

In A War Like No Other, you'll discover how little it would take to transform the close cooperation and friendly rivalry between the United States and the People's Republic of China into the first-ever shooting war between two nuclear powers. This chilling look into one possible future offers thoughtful advice to both governments on how to reduce the chances of such a nightmare actually occurring. Two Brookings Institution scholars offer specific prescriptions on how the two nations can improve communications, especially in times of crisis; avoid risky behavior, even when provoked; and, above all, remember which buttons not to push.