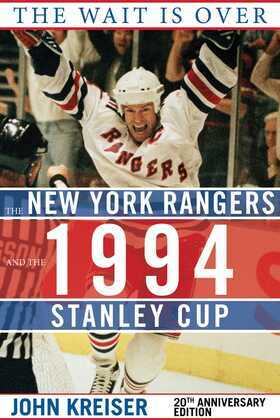 The Wait Is Over

by John Kreiser (Author)
Excerpt
Nonfiction Nature, recreation and sports Sports & recreation Hockey
warning_amber
One or more licenses for this book have been acquired by your organisation details
EPUB
Unlimited loans, 2 years, One at a time
Details

After an over 50-year drought, the New York Rangers defeated the Vancouver Canucks in a dramatic seven-game series to capture the Stanley Cup in 1994. For this reason and countless more, 199394 will forever stand out as one of the most memorable seasons in Rangers history.

Now, 20 years later, NHL.com writer John Kreiser recounts that historic season, from the key acquisitions leading up to the first game, to the erratic beginning of the regular season, and all the way through the victory parade. Including stories of new coach Mike Keenan, goaltender Mike Richter, and key players like Steve Larmer, Stéphane Matteau, Mark Messier, and many more, Kreiser relies on numerous interviews with an array of sources to recapture all the glory from 20 years ago. The Wait Is Over is a perfect addition to the bookshelf of any fan of Rangers hockey!

Skyhorse Publishing, as well as our Sports Publishing imprint, are proud to publish a broad range of books for readers interested in sportsbooks about baseball, pro football, college football, pro and college basketball, hockey, or soccer, we have a book about your sport or your team.

Whether you are a New York Yankees fan or hail from Red Sox nation; whether you are a die-hard Green Bay Packers or Dallas Cowboys fan; whether you root for the Kentucky Wildcats, Louisville Cardinals, UCLA Bruins, or Kansas Jayhawks; whether you route for the Boston Bruins, Toronto Maple Leafs, Montreal Canadiens, or Los Angeles Kings; we have a book for you. While not every title we publish becomes a New York Times bestseller or a national bestseller, we are committed to publishing books on subjects that are sometimes overlooked by other publishers and to authors whose work might not otherwise find a home.