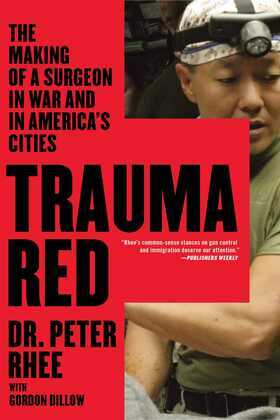 The incredible life story of the trauma surgeon who helped save Congresswoman Gabby Giffords­—from his upbringing in South Korea and Africa to the gripping dramas he faces in a typical day as a medical genius.

Congresswoman Gabby Giffords is a household name: most people remember that awful day in Arizona in 2011 when she was a victim of an act of violence that left six dead and thirteen wounded. What many people don’t know is that it was Dr. Peter Rhee who played a vital role in her survival.

Born in South Korea, Rhee moved with his family to Uganda where he watched his public health surgeon father remove a spear from a man’s belly—and began his lifelong interest in medicine. What came next is this compelling portrait of how one becomes a world class trauma surgeon: the specialized training, the mindset to make critical decisions, and the practiced ability to operate on the human body. Dr. Rhee is so eminent that when President Clinton traveled to China, he was selected to accompany the president as his personal physician. In Trauma Red we learn how Rhee’s experiences were born from the love and sacrifices of determined parents, and of Rhee’s own quest to become as excellent a surgeon as possible.

Trauma Red chronicles the patient cases Dr. Rhee has handled over two decades on two distinct battle fronts: In Iraq and Afghanistan, where he served as a frontline US Navy surgeon trying to save young American soldiers, and the urban zones of Los Angeles and Washington, DC, where he has been confronted by an endless stream of bloody victims of civilian violence and accidents. Tough and outspoken, Dr. Rhee isn’t afraid to take on the politics of violence in America and a medical community that too often resists innovation. His story provides an inside look into a fascinating medical world, a place where lives are saved every day.