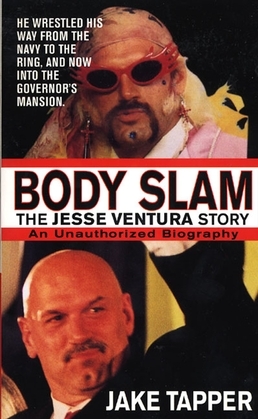 In every arena, Jesse Ventura put a headlock on the competition. From his Navy SEAL days, to his infamous wrestling years, to his stunning political victory, read the story of the Body, a man who truly embodies the American Dream.

How did an outrageous, outspoken, boa-wearing pro wrestler nab the title of Minnesota's governor in an overwhelming upset? This is the question the nation is asking--and Washington journalist Jake Tapper provides the fascinating answers in Body Slam: The Jesse Ventura Story.

Get the real story on:
-His intense training to become an elite Navy SEAL and his experiences overseas during the Vietnam War
-His lengthy career in the pro wrestling field--from flamboyant pro wrestler to colorful commentator--including his feuds with Hulk Hogan and Vince McMahon Jr.
-Ventura's acting stints, including a part in the film Predator
-How the Body mouthed his way to the top of shock radio
-His rise through the ranks of politics, from mayor to governor--and maybe beyond
-Ventura's political vision--what he sees for Minnesota and the country
-And much, much more!

The Body Politic Will Never Be the Same.