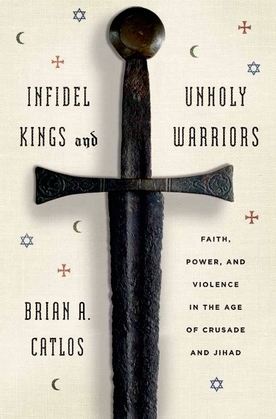 An in-depth portrait of the Crusades-era Mediterranean world, and a new understanding of the forces that shaped it

In Infidel Kings and Unholy Warriors, the award-winning scholar Brian Catlos puts us on the ground in the Mediterranean world of 1050?1200. We experience the sights and sounds of the region just as enlightened Islamic empires and primitive Christendom began to contest it. We learn about the siege tactics, theological disputes, and poetry of this enthralling time. And we see that people of different faiths coexisted far more frequently than we are commonly told.
Catlos's meticulous reconstruction of the era allows him to stunningly overturn our most basic assumption about it: that it was defined by religious extremism. He brings to light many figures who were accepted as rulers by their ostensible foes. Samuel B. Naghrilla, a self-proclaimed Jewish messiah, became the force behind Muslim Granada. Bahram Pahlavuni, an Armenian Christian, wielded power in an Islamic caliphate. And Philip of Mahdia, a Muslim eunuch, rose to admiral in the service of Roger II, the Christian "King of Africa."
What their lives reveal is that, then as now, politics were driven by a mix of self-interest, personality, and ideology. Catlos draws a similar lesson from his stirring chapters on the early Crusades, arguing that the notions of crusade and jihad were not causes of war but justifications. He imparts a crucial insight: the violence of the past cannot be blamed primarily on religion.